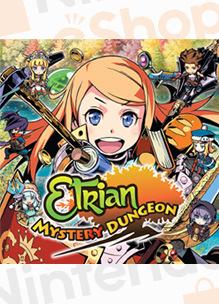 Etrian Mystery Dungeon reappeared on the Nintendo 3DS eShop in North America no later than April 29th, 2021 when it was submitted to the site. However, by May 18th, 2021 another reader noticed that the game had been removed from the 3DS eShop. Attempting to purchase it through Nintendo.com returned the error “this content is currently unavailable”. It is unclear if the delisting was intentional or if the game may yet return to sale. The original delisting details follow.

Etrian Mystery Dungeon was likely delisted due to the end of a licensing deal between Atlus and Sega, who own and publish the Etrian Odyssey series, and Spike Chunsoft, creators of the Mystery Dungeon series. The game was next delisted in Europe between August and September of 2020. As of October 2020 the game remains available exclusively in Japan.

“Far off in the mountains, the small village Aslarga becomes a hub for adventurers looking for fame and fortune from the Mystery Dungeons. But dire challenges await even the most stalwart adventurers in Etrian Mystery Dungeon, a turn-based action RPG rogue like developed by ATLUS and Spike Chunsoft.

Players form their parties with familiar Etrian Odyssey classes, such as Landsknecht and Runemaster, customize individuals using Etrian-style skill trees, and then take up to four members into the dungeons. Always randomized with various levels and paths, the dungeons require plenty of exploration, not to mention the incredible loot rewards — just be wary of what waits among the deepest depths.“

Thanks to robdaboss72 for submitting this game to the site