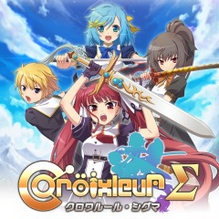 Nyu Media announced on May 29th, 2019 that Croixleur Sigma would be removed from sale on Steam (and through key reseller sites) on June 1st. The cause of the delisting is an expired license to the game between Nyu Media and developer souvenir circ.

“If you have Croixleur Sigma in your wishlist, now might be a good time to pull the trigger! Our license to sell Croixleur Sigma has expired and delist the title from the Steam store and other distributors on June 1st.

You can expect to see more Croixleur-related developments from souvenir circ. and PLAYISM in the near future, but Nyu Media is signing off.

It has been an honor and a pleasure to bring this title overseas. MANY thanks to everyone who has supported the game, the developer souvenir circ., and your humble publisher Nyu Media!”

After the original release, developer souvenir circ. teamed up with publisher Playism to remaster the game for PlayStation Vita, PlayStation 4, and Nintendo Switch. This updated version was then released on Steam on November 19th, 2019. Owners of the original version were gifted a limited-time 60% Off coupon towards the purchase.

Based on discussion, the original version appears unique enough that we will not consider this a relisting, although links to the new Deluxe Edition are provided above.

To commiserate with fans, Nyu put the game and its soundtrack on sale between May 30th and 31st, leading up to the delisting.

“Tonight, in the Queen’s realm of Ilance, two prodigies representing the Knight and Aristocrat factions will do battle in ‘the Adjuvant Trial’. This ritual, which has been held since the founding of the nation, decides which faction will hold military and political authority, and protect the Queen, the living symbol of the realm. The fate of the nation is at stake as these two girls set aside their childhood friendship and undergo a trial in which there can be only one victor.

Thanks to Yuzu Merce for submitting this game to the site