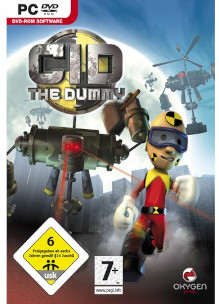 CID The Dummy was delisted from Steam on May 2, 2015. The reason for the delisting is unknown, but may have been a result of Twelve Games ceasing to be an active Steam publisher.

In a world obsessed with safety the once lowly Crash Impact Dummy has risen to a position of great importance amongst us. Their day job – crashing, smashing, checking, re-checking and re-rechecking everything from lemonade to escalators to make the world a better place.
Now, the Crash Impact Dummy inventor, Dr. B.M.Werken, has lost his daughter and has choosen CID THE DUMMY to rescue…err…find her.
A chance to rescue the most beautiful girl in the world? Could be…a chance to crash and smash with real purpose? Definitely!
CID THE DUMMY is a platform game that grabs you straight away with its amusing blend of action and puzzle-filled game play. Based around the multiple opportunities for a Crash Impact Dummy to get into mischief, the game blends classic platform elements such as timed jumps, collecting pick-ups, defeating enemies, and challenging boss battles with more cerebral elements such as puzzles, clever weapon use and route finding.