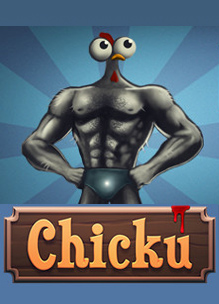 The Gatling Goat team announced on Steam on August 8th, 2018 that Chicku would soon be removed from sale and the studio shut down. The game was removed by the following day on August 9th.

It’s with a sad heart we post this announcement. For a while as a studio we’ve struggled to find our core, we’ve been working on different concepts but nothing really felt great. We tried for so long, keeping the company afloat but as you might have guessed we’re closing down.

As a result of this, we’ll remove Chicku from being purchasable in the Steam store. Please accept our apology and thank you for the time you’ve spend saving millions of Chickens from the evil Dr. Barrington. We love you and hope we’ll meet again.

Chicku is a nail bitingly hard platformer in which the player has to escape the Barrington farm. You’ll be forced to dodge saws, spikes and many other deadly traps in order to save your brethren and rise against the evil Dr. Barrington. Play alone or with friends in this epic adventure and slaughter save millions of chickens along the way.

When you’re done saving your species, challenge your friends’ flying skills or their ability to handle a weapon in the bloodthirsty cockfight arena. Also, why not wear a fancy hat while you do it? Playing with a controller/gamepad is highly recommended

Thanks to Lee Tursi for submitting this game to the site