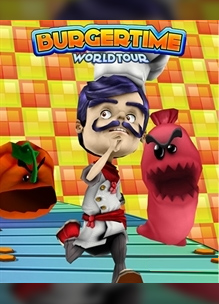 MonkeyPaw Games announced on April 15th, 2014 that BurgerTime World Tour would be delisted on all platforms on April 30th, with the game being discounted to $4.99 until then. Ryan Olsen, then the PR Manager for MonkeyPaw Games, commented on the delisting stating:

Removing a game is never something we like to do, but it is part of the nature of working with retro game franchises. For those that have yet to snack on the game, we are offering it at a tasty price before BurgerTime World Tour is taken off the menu.

BurgerTime World Tour was delisted on Nintendo Wii and Xbox 360 on April 30th as planned, but still remains available on PlayStation 3 as of February 2022, possibly due to an oversight. BurgerTime World Tour was also made available on the OnLive streaming service on August 14th, 2012 and was likely removed on the same date as the Nintendo Wii and Xbox 360 versions.

The game was delisted due to expired licensing between MonkeyPaw and G-Mode, the current IP owners of BurgerTime.

An all-time arcade favorite gets a second helping as BurgerTime World Tour elevates classic gaming to the next-gen universe. Hero Peter Pepper returns and traverses the globe challenging chefs from around the world. Gamers will tackle 50 total levels and boss fights in each of the four environments. For the first time ever, the game will also feature online and split-screen multiplayer modes for four players with online leaderboard and avatar support. BurgerTime has never been more meaty!