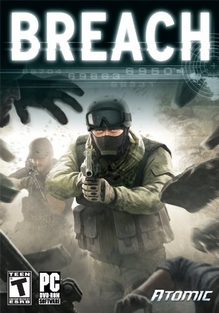 Breach was delisted from Steam and its official servers shut down in August of 2011. The game remained available on Xbox 360 until it was delisted in February of 2015, according to TrueAchievements.com. The game was delisted after Destineer, who had acquired Atomic Games in 2005, ceased operating in May of 2011.

An unconfirmed ex-employee of Atomic Games, referring to himself only as “oh hi mark” posted to the game’s Steam Community forum in June of 2016 to recount the history of the studio, its controversial and unreleased title Six Days in Fallujah, and how its development led to Breach’s demise.

As of September 2019, copies of the game could still be purchased on physical media and Steam keys may also have been available from other sources. Some players on Steam have organized private servers and multiplayer games can occasionally be found running.

Introducing the first military shooter with enough destruction to change the very nature of multiplayer combat.

Breach is a first-person multiplayer shooter in which you can crash ceilings on opponents, create mouse holes, disintegrate cover, punch holes through floors, blow out walls, collapse entire buildings, and so much more.

While most first-person shooters don’t include any kind of cover system, Breach mixes its unique Active Cover system, which lets you attach instantly to cover, pop in and out of cover, blind fire, and more, with an environment in which virtually anything that can be used for cover can also be destroyed.

Break free from environments that stay the same every time you play. Breach arms you with dozens of real military tactics that are not possible in any other game.

Thanks to @seniormeatbox for submitting this game to the site