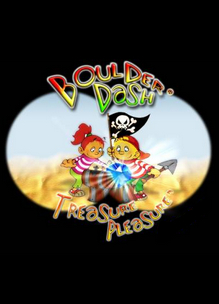 Boulder Dash: Treasure Pleasure was initially released on shockwave.com and was sold as a standalone PC title through the portal site FlyorDie.com. The game was likely removed from sale in 2017 after First Star Software transferred ownership of the Boulder Dash property to BBG Entertainment. However, FlyorDie would not confirm the game’s removal until September of 2019 when they explained “we had to stop selling Boulder Dash games due to legal reasons”.

The game is readily found on many dubious “free game” sites around the internet but the anonymous contributor who submitted Treasure Pleasure to the site pointed out that these are all trial versions. A cracked or edited full version of the game is available but we will not link directly to this download. Interestingly, some versions of the game are still connected to FlyorDie’s high score tables and as of May 2020 several players were still setting high scores in the game.

In 2011 the game was licensed to PlayJam and included in their library of titles available on internet-connected smart devices. This includes TVs and Android-powered hardware from LG, Panasonic, Samsung, Sony, Huawei, and more. We were unable to confirm at the time if Boulder Dash Treasure Pleasure was still available via PlayJam.

“Boulder Dash®-Treasure Pleasure™, retailing for US$24.95 contains twenty two Tutorial levels as well as sixty Game levels spread across three different graphic worlds of twenty levels each. In addition to the ability to play as either Rockford™, or his sister Crystal™ , users will be treated to ever increasingly difficult levels and many new and exciting tools and features including: Reverse Gravity (diamonds float in the underwater world); Screen Rotation; Dynamite & Detonators, Bombs; Hammers; Boots; Growing Walls; Magic Walls; and, numerous enemies.“