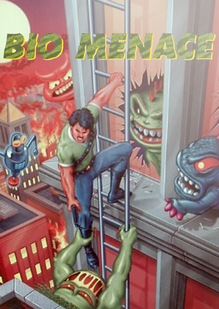 Bio Menace was delisted from Steam on December 31st, 2015. It is currently available to download for free from 3D Realms.

“Intelligence reports indicate that a man calling himself Dr. Mangle is responsible for the mutants and the destruction of Metro. You will have to battle your way through levels packed with evil mutants and robotic guards to finally infiltrate Mangle’s fortress and defeat him. You think to yourself that this will be the most dangerous mission of your life.

Snake Logan is a weapons expert, and uses several throughout the game, including a high-powered machine gun and grenades.“