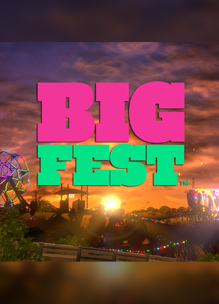 BigFest was delisted on the European and Australian PlayStation Store for PlayStation Vita no later than June 12th, 2018. This is the date we received a submission pointing out that the game had been removed. As of April 2022 the game remains available exclusively in North America.

On August 8th, 2014, before the game’s launch on Vita, Sony announced that BigFest would be ported to PlayStation 3 and PlayStation 4 but those versions were never completed. The game’s developer, On the Metal ltd, ceased making social media posts in 2016 and Archive.org last shows their website available on April 24th, 2017, which has since gone offline. Between the game’s poor reception and its design that required frequent new music and online service, it appears Sony had chosen to quietly retire the game in Europe and Australia.

With the help of Big Dave and a crew of trusty roadies, BigFest gives music-lovers the ability to discover real-world music talent and build the ultimate music festival. As a music promoter, your job is to develop bands and manage the festival, starting with a small stage in the middle of a field and progressing to a multi-day mega festival.

At its heart, BigFest is about the music. Working in partnership with Jamendo, the largest free music platform in the world, you uncover real unsigned bands and help them climb the charts by building the perfect show. How you keep the crowd happy is your decision; whether it’s through great music, the best food, or the biggest stages, you will notice the festival “vibe” increase as you get better at your job. As you build up your reputation and more people come to your shows, you’ll earn more notoriety and be able to expand your shows to become the world’s greatest music promoter.

Your music your way
Discover and promote real-world, unsigned bands whose tracks are available via our partnership with Jamendo, the largest free music platform in the world. BigFest features a wide range of artists from Rock to Hip-Hop, Country to Heavy Metal.

Asynchronous multiplayer
Call upon your friends to help you complete tasks or share music recommendations. Players can swing by friends’ festivals to help build the best show or sabotage their success. If you’re feeling generous, boost each other’s festivals by repairing a broken toilet or capturing a streaker. And if you’re feeling a bit naughty, try vandalizing your friend’s tour bus or destroying the stage!

Reactive crowds
The crowd grows and surges dynamically depending on how well you manage the festival. You will know when you’re making the right choices because the crowd will tell you. Will they boo and walk away, or roar for an encore?

Community
BigFest wouldn’t be a music festival unless you could rock out with your friends. BigFest tracks the community’s favorite bands, helping to promote unsigned bands not just in the game but also in the real world.

Thanks to  Lance_87 for submitting this information to the site