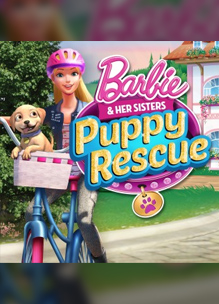 Barbie And Her Sisters Puppy Rescue was delisted on Steam on April 27th, 2017, falling in line with the Spring-to-Summer time period that many of Little Orbit’s licensed titles were removed from sale. The game was likely delisted in this same period on Nintendo 3DS, Wii U, and Xbox 360.A PlayStation Blog post announced in April of 2017 that the PlayStation 3 version of the game had just been added to the streaming PlayStation Now service. PSPrices later reflected that the game was withdrawn from sale on PlayStation 3 in early February of 2018.

In all cases the delistings were most likely related to expired licensing between Little Orbit and Mattel. Barbie And Her Sisters Puppy Rescue remains available on physical media.

Set in Barbie’s hometown Willows, and inspired by the upcoming DVD BarbieTM and her Sisters in the Great Puppy Adventure,  players will join Barbie and her sisters –Skipper, Stacie and Chelsea – as they solve clues to find and rescue lost puppies. Each sister will bring her own unique set of skills and activities to the game.  Give puppies a check-up with Skipper at the Roberts Sisters Puppy Rescue, groom the pups at Chelsea’s Puppy Day Care or teach them new tricks at the Pup Camp with Stacie! Cuddle and play with the puppies until they can go to their fur-ever homes!

Thanks to Henrikus for submitting this game to the site