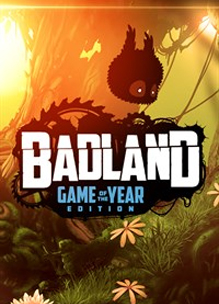 BADLAND: GOTY Edition has been delisted from the Nintendo Wii U eShop in North America. At this time the date of delisting is uncertain but may have taken place in late September of 2017. This is the last date that Archive.org captures show the game was available in North America.

The delisting may also have taken place between 2018 and 2019. This timeframe marks a known period where several independently published releases were being removed from the platform, allegedly because Nintendo of America was no longer renewing their developer/publisher licenses.

“Side-scrolling action adventure. Innovative, physics based gameplay. Stunning atmospheric graphics and audio. Fly and survive through the award- winning world of BADLAND and discover an astonishing number of imaginative traps, puzzles and obstacles on the way.

BADLAND is a multi-award-winning side-scrolling action adventure with innovative physics-based gameplay and stunning atmospheric graphics and audio. BADLAND: Game of the Year Edition has been redesigned for the Wii U™ with new analog stick controls and enhanced Full-HD visuals.
100 single player levels & loads of local multiplayer fun: up to four players can compete against each other on 27 different deathmatch stages or work together to survive through all 100 levels of the co-op campaign.“