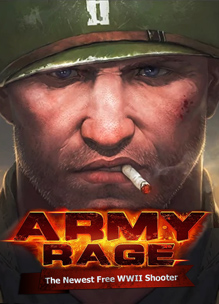 Army Rage, its website portal, and in-game currency were all taken down on July 20th, 2013. Its online servers were then shut down on July 22nd, 2013. The website was replaced by the following statement:

With great regret we need to inform you that we are preparing for closure of Army Rage and all related services. Thus, the Buy Cobalt function will be disabled as of 20.7.2013 while the game servers will be shut down on 22.7.2013

We аre very sad to break the bad news and we want all our players to know how much we value all your support during these amazing months. We understand that many of you will be very disappointed but we would like to assure you that closing the company and Army Rage was never part of our plan and we still truly believe in its potential. Unfortunately, circumstances beyond our control have forced us to take this hard decision.

In the past couple of years our team has spent lots of sleepless nights, always striving to improve the quality of the game and thanks to your constant help and tons of suggestions we’ve managed to transform Army Rage into one of the best shooters available which makes it even harder for us to make this announcement.

We would like to thank you once again for your continuous support and we hope that you’ve enjoyed all the hours spent on the battlefield.

Heartfelt as it sounds, the game’s closure appears to be in relation to assets and elements that Tuyasoft and Yacuba Games knowingly lifted from several other World War II era action titles. Chief among them was Forgotten Hope and Forgotten Hope 2, a pair of Battlefield 2 mods from the group known as Forgotten Hope Devs. Beginning in April of 2012, the group documented the materials that Army Rage reportedly stole and updated on their efforts to work with Tuyasoft and Yacuba Games. The beginning of their introduction post sets the stage:

It has recently come to our [Forgotten Hope developer team] attention that a game titled “Army Rage” has been released, which consists largely of a vast quantity of Forgotten Hope (FH) material, without our permission, as well as material taken from a number of other popular, commercial titles. Army Rage was developed by “Tuyasoft”, based in Beijing, China. The publisher is Yacuba Games LTD, and based in Sofia, Bulgaria. According to the corporate website, its CEO is “Delzar Khalaf”. The affected titles, from which material was copied, include:

The material in question includes models, textures and sounds (further detailed on this page below).

The post painstakingly details the similarities between the games, going so far as to offer a homemade extraction tool so players could compare the assets from both games directly. Over the next few months the team continued relating their efforts and setbacks in dealing with the situation, including a Eurogamer article that was shut down amid a “legal tangle” between the site and Yacuba Games. Nearly a year later, on July 20th, 2013 and alongside Army Rage’s closure notice, the page was updated for the last time:

It is unclear why this happened all of sudden, although we can speculate that some of our community efforts may have had something to do with this 😉 . We have not been able to re-establish contact with Yacuba Games LTD to ask them, but it would be safe to conclude that something must have troubled their means of continuing business. It also appears that Yacuba itself is no more, as their website has been taken off-line as well.

From Army Rage Wiki: Army Rage is a free to play online shooter based entirely on the World War II conflict between Axis and Allies. It includes exciting content which hasn’t been experienced much in other FPS games – use of some authentic WWII powerful weapons (i.e. rocket-launcher in longer-distance battles, flamethrower in close combats); artillery support; constructing heavy machine guns and even driving tanks freely on the battlefield. Players encounter the heaviest firepower ever seen in games of this class.

Army Rage achieves an impressive team work as the players have the opportunity to choose one of the two rival sides, team up in 6 separate teams of 4 people each and set their class – Assault (equips powerful grenades and assault rifles), Scout (skilled sniper), Support (equips anti-tank rifles and flamethrowers, uses machine guns and drops ammo and medical kits to assist other players) and Engineer (uses submachine guns and rocket launchers, has the unique ability to build stationery heavy machine guns and protective shields).

There could be up to 24 players competing with each other or united in teams in one game room and a virtually unlimited number of players simultaneously on the game servers. The players can create as many rooms as they like with different maps, missions and game modes in order to achieve a more dynamic game play.