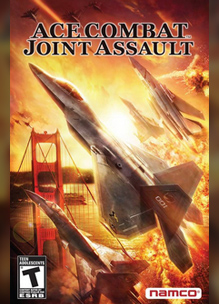 Ace Combat: Joint Assault was delisted from the PlayStation Store for PlayStation Portable and Vita no later than June 30th, 2016. According to the Ace Combat Fandom Wiki this news was first posted on the official Japanese Ace Combat homepage in 2016.

The PSP® system is pushed to the limit with fast-paced dogfights, fantastic new visuals, real-world locations, and the most robust multiplayer options seen yet from the world’s number one flight-action series.